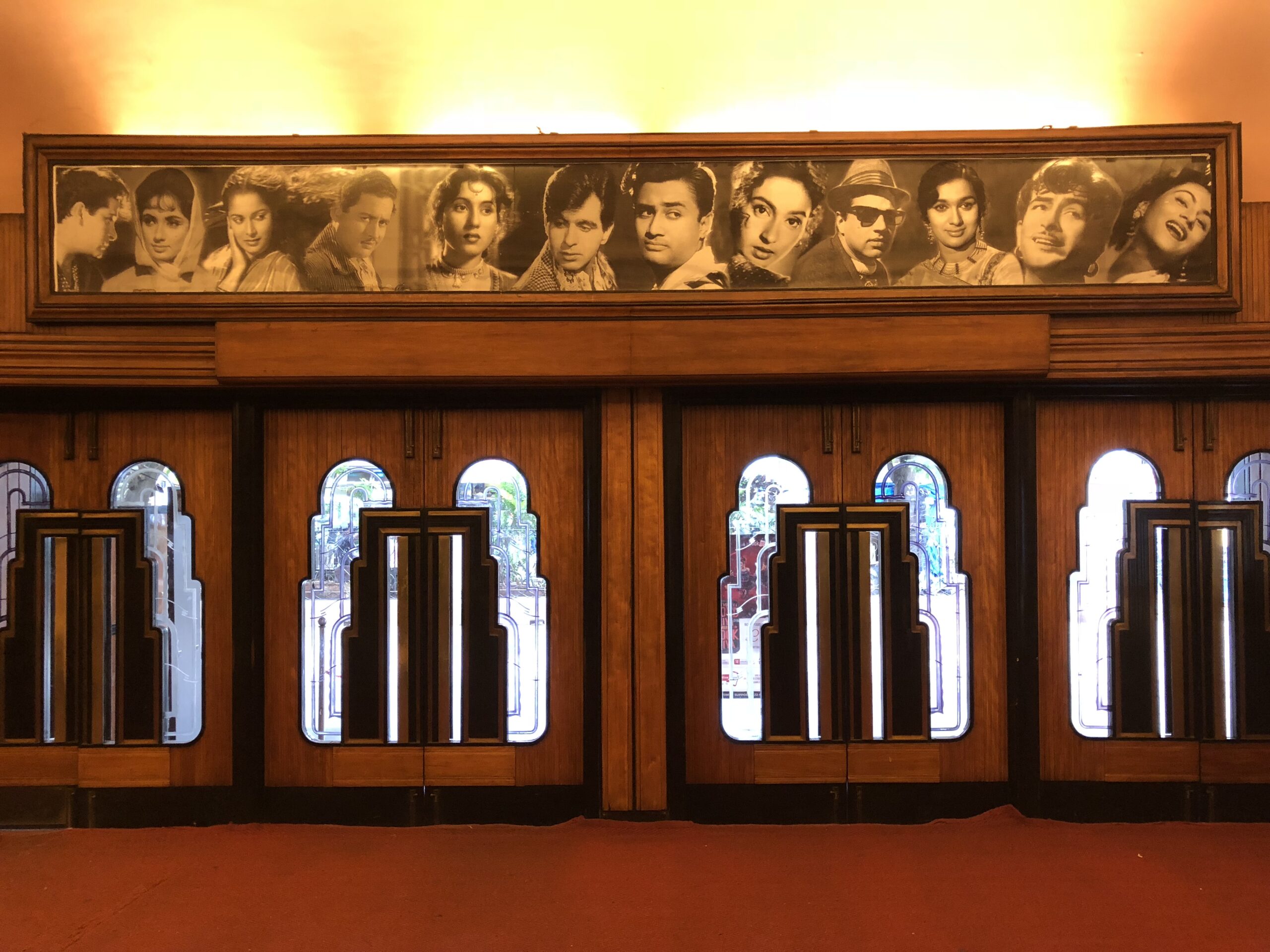 On 13th March, 1949, Liberty Cinema, the ‘Showplace of the Nation’ was inaugurated in Bombay’s Marine Lines. Founded by Habib Hoosein, a cotton trader by profession but a cinephile in spirit, the cinema was named in honour of India’s independence from British rule in 1947. It became the first cinema dedicated to Hindustani films, at a time when most theatres in the area were playing English pictures. Hoosein started by showing films in the Bandra Gymkhana every Sunday, prior to the Second World War. When the war hit, he found the opportunity to set up cinemas across Bombay, Pune and Deolali for the general entertainment of the troops. Liberty, finally, was a culmination of all these endeavours, which were consolidated into a grand Art Deco picture palace, with the laying of the foundation stone in 1947. It holds a special place in south Mumbai’s cultural landscape, making its mark amidst neighbouring cinemas like Metro, which were sponsored by big Hollywood studios, and largely played English films. If Regal, Bombay’s first Art Deco picture palace, has the Oscar statue etched into a mirror on the staircase, Liberty, which some observers have argued was the “grand finale” of Art Deco cinemas in the city, displays a hand painted, original poster of Raj Kapoor’s Awara on its stairs. Above its main doors is a black and white montage of Hindustani cinema’s biggest stars in the 1950s and 60s. The history of this picture palace, in many ways, is the history of Hindi cinema post-independence.

The theatre’s beginnings were rough. M A Riddley Abbott, the Canadian architect who was originally commissioned to design it, died in a plane crash when only the first storey of the building had been completed. Architect J B Fernandes was brought in to complete the rest of the structure, and the interiors were designed by W M Namjoshi, with close involvement from Hoosein. In 1949, two years after its foundation, the theatre opened with Mehboob Khan’s Andaz, starring Dilip Kumar, Nargis and Raj Kapoor. Soon after, it became the hub for Bombay cinema’s glitterati, hosting blockbuster premiers and galas, with the crème de la crème of the industry sashaying through its halls. The mini theatre on the top floor of the Liberty building held many soirées, edit trials and film screenings for the who’s who of the film fraternity, since the 1950s. Hoosein personally hosted each show.

Both the main and the mini theatre are architectural marvels in themselves. The incandescent bulbs put up an incredible light show, even before a film screening begins. In some ways, the theatre itself has been designed to perform, leaving each patron awestruck by its colours, details and grandeur. It is bedecked, top to bottom, in the finest Canadian cedar and Burma teakwood. “To date we have the original wood panels stored. If anything needs to be replaced, it is taken from that stock. You will not find a single piece of unoriginal wood in the theatre,” boasted Rafi Attaullah Khan, a long-time staffer at Liberty, while speaking to Art Deco Mumbai.

In 1970, after Habib Hoosein’s death, the theatre was taken over by a private consortium, which led to a 20-year spell of neglect and disrepair, until his son Nazir was able to acquire the theatre back for the family. Unlike his cinephile father, Nazir’s first love was automobiles. A former racer, Nazir founded the Himalayan Car Rally in 1980 and was credited with giving a significant boost to Indian motorsports. Under his care, the theatre flourished again. In 1994, Liberty was one of six theatres in Bombay to screen Rajshri Productions’ Hum Aapke Hain Koun..! The film went on to become the longest-running picture at Liberty, with three ‘full house’ shows a day for 44 weeks. Two million people watched Hum Aapke Hain Koun..! at Liberty cinema.

Nazir was also pragmatic. With the turn of the century and the arrival of multiplexes into the exhibition market, single screen theatres across the country have taken a hit. Liberty remains one of the few picture palaces from the last century to maintain its original architecture and framework immaculately, and with a rare passion that has never been limited by commercial considerations. Having said that, the theatre has also evolved with the times, upgrading its infrastructure to accommodate newer exhibition technology, hosting festivals and events, and opening its doors to more than film showing.

Today, the Liberty cinema holds on under the guardianship of the Hoosein family, albeit with difficulty in the face of mounting running costs and competition from multiplexes. This short film by Art Deco Mumbai Trust is born out of the urgency to document the rich legacy of this theatre, and the significant place it holds in the annals of Hindi cinema. Single screen theatres, Art Deco picture palaces and the more modest cinemas alike, face a threat of neglect, and are struggling to stay economically viable. It, therefore, was imperative for us to document Liberty cinema, with its near-pristine original architecture and interiors.

The film is also a tribute to Habib and Nazir Hoosein, the makers and custodians of Liberty who gave Bombay much more than a cinema. This treasured picture palace has a place in childhood anecdotes, long-lived friendships, new romances, and more. It is a priceless piece of Mumbai’s history, often forming the backdrop to the lives of its citizens and their memories. Listen to Nazir Hoosein’s voice, from an oral history recorded one year prior to his death in 2019, juxtaposed with the memories of his beloved staff. The Liberty has always been a labour of love, with a lifetime of loyalty, care and affinity shown to it by its owners (now a third generation of the Hoosein family), and its long-standing staff and patrons. Our short film attempts to preserve and acknowledge that sentiment.

Our thanks to film maker Vani Subramanian and Professor Mary N. Woods for Nazir Hoosein’s interview, archival photos and the Liberty clip from their forthcoming film.

Header Image: The main entrance to Liberty cinema’s iconic lobby, with a black and white montage of some of the biggest Hindi film stars above. Photograph taken on 13 June, 2018. Source: Art Deco Mumbai