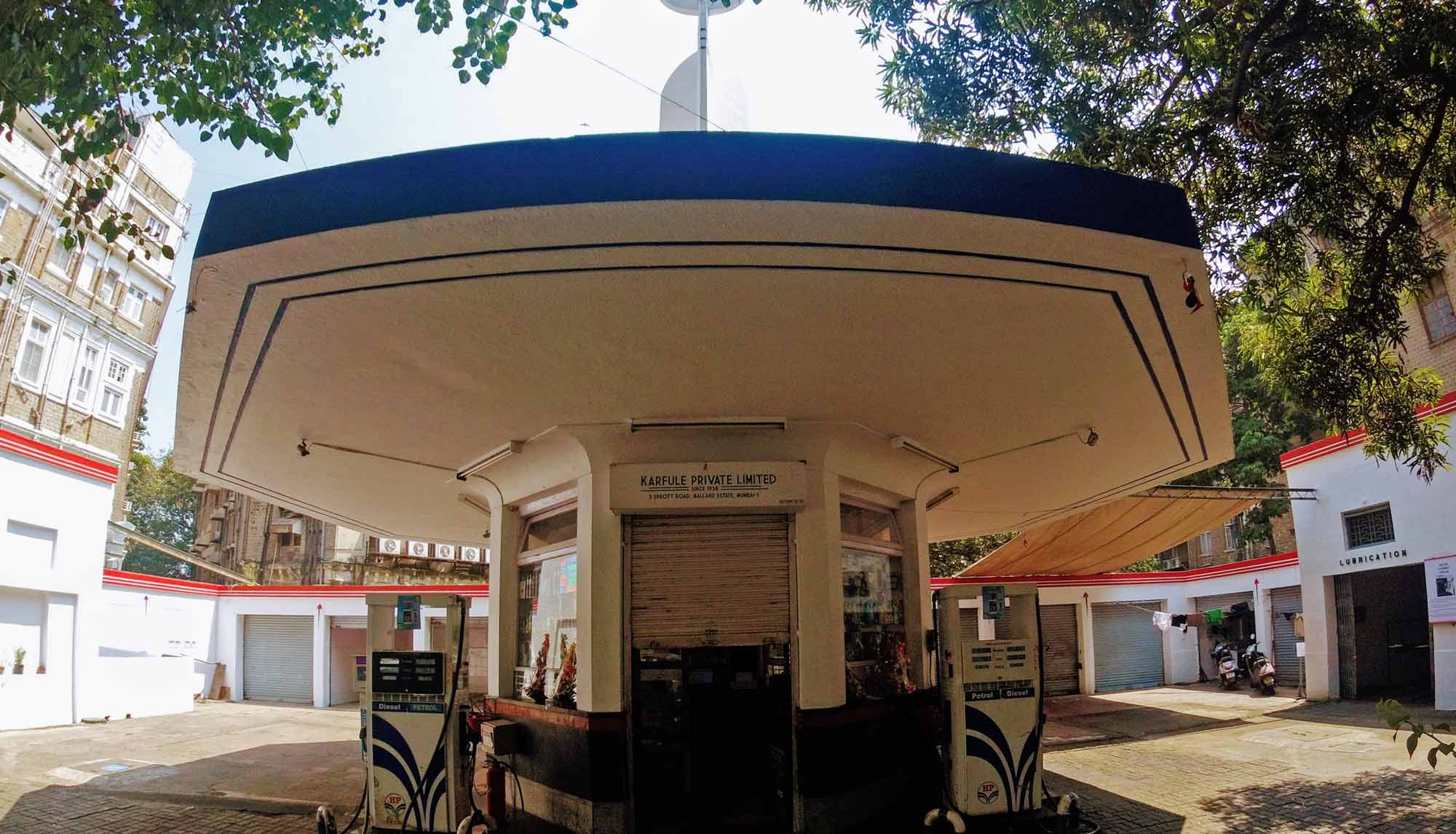 Art Deco architecture typologies in Mumbai are not just limited to schools, residential buildings, offices, and cinema theatres. Here, we take a look at an iconic fuel service station – Karfule.

Nestled in the heart of Ballard estate is one of Mumbai’s only surviving Art Deco petrol stations, Karfule (pronounced “car-fuel”). Flanked by Edwardian neoclassical stone edifices, Karfule was built in 1938, at the height of the Art Deco movement in the city. It is unique for its distinct Art Deco architectural features — intact and impeccably maintained by the owners, the Sequeiras.
The Art Deco style, commonly seen in the city’s apartment buildings, commercial buildings and cinema theatres built in the 30s and 40s, was cleverly incorporated into the design of this petrol station. Aside from its Deco design, Karfule is a special landmark in the city’s built heritage for being designed by one of Mumbai’s most prolific architects of the Art Deco era, G.B. Mhatre, along with his firm Architectural Studio.

Karfule’s origins in the era of Speed

The Art Deco movement is often associated with the era’s fascination for speed, being largely influenced by aerodynamic innovations in automobile design. It was a period of technological advancements, especially in architecture and the automobile industry. Bombay, like the rest of the world at the time, saw a high demand for automobiles in the 1930’s, evidenced by several automobile showrooms opening up across the city. Most notable among these were the showrooms at Sandhurst bridge. The Dadajee Dhackjee showroom which opened in 1934 at the magnificent Art Deco building Shree Pant Bhuvan, were dealers for Hupmobile, Packard and Mercedes Benz. Nearby, Patel Chambers which was built in 1937 had showrooms for Allied Motors on the ground floor and a car workshop in the basement¹. As the automobile industry flourished and the private car grew increasingly popular as a mode of transport, important thoroughfares such as the Pherozeshah Mehta road in Fort and the Marine Drive at Backbay Reclamation were constructed in the 1930’s to accommodate this vehicular traffic.

It was around this time that Gabriel Sequeira, an enterprising young Goan migrated to Bombay from the village of Sangolda, Goa. He saw entrepreneurial opportunities in car servicing and set up a small motor lubricant shop called “Automobile Resort”at the age of 23, with a kerbside petrol kiosk. With financial support from his father, he soon opened a fuel and service station of modest capacity in Ballard estate, with fuel supplied by Burmah Shell. Gabriel however, had long harboured a dream of building his own fuel and service station capable of providing complete service to motorists. This dream finally materialised in 1938, when he set up ‘Karfule’ on a bigger plot of land, its present location at 3 Sprott Road (SS Ram Gulam Marg) in Ballard Estate.

For the design of his dream petrol pump, Gabriel Sequeira enlisted architect G.B. Mhatre and his firm Architectural Studio. G.B.Mhatre was responsible for the design of many prominent Art Deco buildings across the city and was one of the most prolific architects of the 20th century in Bombay. Some of his buildings include Empress Court at Oval maidan; Marble Arch, Shangri-La, and Normandie at Cumbala Hill. The Sequeira family carefully preserved G.B. Mhatre’s architectural drawings that were prepared for Karfule.

Seen in the hand rendered drawing is the elevation of Karfule from Sprott road, with a central kiosk surrounded by a driveway and garages. The layout was well thought out with the placement of the kiosk in the centre, enabling easy circulation for vehicles and for fuel tankers to replenish fuel stocks. The clean, minimal design was constructed in reinforced cement concrete and finished with Malad stone facing. The construction of the petrol pump was carried out by Simplex Concrete works and Construction Co., a firm run by B.M. Hodiwala and Sons. Construction began in April 1938 and was efficiently completed in a short span of 5 months.

Karfule was formally inaugurated on 3 October 1938. The opening event was blessed by His Grace, Dr. Thomas D. Roberts, the Bishop of Bombay. Also present was Mr. Best, representative of Caltex².

Soon after Karfule opened, Gabriel Sequeira developed a network of outposts that enabled Karfule customers to fill fuel on credit at five kiosks he set up at Apollo Bank Building, Grant Road, Lamington road and Dadar respectively. Fuel for the Karfule scheme was supplied by Caltex (California Texas Oil Company), which began operations in India soon after its incorporation in the United States in 1936.

The name “Karfule” was chosen by Gabriel’s wife Teresa. She was in charge of preparing all correspondence with Karfule clients and associates and was responsible for the bookkeeping. She often drove to the outposts to oversee operations. During world War II, fuel became a scarce resource and it was during this time that the five outposts closed down. However, the service station at Ballard estate survived, and throughout this difficult period the Sequeiras ensured that there was no compromise on the quantity or quality of their fuel and services.

The central kiosk with its cantilevered umbrella canopy and the tower surmounting it, forms the highlight of the design. The large spanned octagonal canopy is supported by inverted beams constructed in reinforced concrete. The tower atop the canopy is distinctly Deco with an aerodynamic design comprising a central spine with a pair of symmetrical vane-like fins on either side. The spine is accented with three speedlines and a disk on top that originally functioned as a clock. The kiosk, which houses the owners office, is octagonal in plan with windows on 7 sides, allowing the owners a 360° view of the activities in the fuel station. The interior has terrazzo flooring laid in a star shape to resemble the Caltex logo. The exterior walls of the kiosk are clad in red marble and black kadappa stone upto the window sill level. The Deco features of the fuel station also include lettering above the service bays and window grilles designed to resemble the headlamps and radiator grilles of cars from the Art Deco era. Horizontal red bands run continuously along the top edge of the service bays.

80 years on, the petrol pump has its original architectural character well preserved with very few alterations. Most significant among these was the whitewashing of the original Malad stone facade by Caltex, after much resistance by Gabriel Sequiera.³ The original clock at the top of the tower was replaced by a Caltex sign. The Caltex sign was taken down from the tower after fuel supply was taken over by Hindustan Petroleum (HPCL) in 1978. The edges of the octagonal canopy, originally red in colour, is now painted blue to match the branding of HPCL. Much of the original Deco lettering survives, as does a single original metal grille. The others are replacements, the original grilles stolen during the 70’s and 80’s when Ballard Estate was a target for petty thieves attracted by its wealthy patrons and businesses. The original star-shaped terrazzo flooring (seen below) in the kiosk is beautifully maintained and shows little sign of any wear and tear. Arrowhead shaped details on the facades of the garages were hand restored in 2018 and painted red. Among its equipment, Karfule also has 2 fully functional Manley hydraulic lifts, a Devilbiss compressor and an analog air gauge, all from the 1930’s which have been repaired and maintained by father-son duo Kevin and Daniel Sequeira — second and third generation owners.

Karfule continues to be a family run business by its second and third generation owners. Gabriel remained involved until his passing at the age of 98 in 2001. Recently, Karfule celebrated the 80th anniversary of its inauguration in 2018. The event was attended by family, friends and longtime customers of the Sequeiras. As part of the event, Daniel, grandson of Gabriel Sequeira, set up an exhibition on the premises showcasing memorabilia collected through 80 years of the business. Among them were archival photographs and carefully preserved original invoices from Architectural Studio, Simplex Concrete works, and other vendors involved in the construction of the petrol pump. Also on display were some of the models of fuel dispensing nozzles used over the years. The exhibition set up by Daniel was so well received that it became a permanent fixture at the fuel station. The menu for the high tea at the 80th anniversary celebration was inspired by the original fare of small cakes, cheese straws and sausage rolls that guests were served on the opening day celebration in 1938.

Karfule today welcomes overland travellers, cyclists, and visitors to Mumbai to avail their services, and has organically evolved into a hub for people of various backgrounds to meet. The Sequeiras continue to stand by their business philosophy of honesty before profit. They have successfully nurtured Karfule as a business while also recognising and preserving it as a piece of Mumbai’s history.

Here’s our story on Karfule published on Google Arts & Culture.