Bombay was known as the city of glorious commercial and port activity. Landlocked by sea on three sides, Bombay was growing short of space to expand. But unlike other Indian cities, Bombay’s growth was through a series of planning initiatives of which ‘Planned precincts’ by the City improvement trust was most significant. In these buildings, form and design were regulated. Planned interventions that occur from time to time altered some of the layers of the urban fabric, but the intrinsic character of the town prevails. This era of planned precincts gave rise to the apartment block as typology. One of the most important persons who shaped the built environment during that period was architect G.B. Mhatre.

Gajanan Baburao Mhatre’s work spanned the period between 1931 and 1970. He was selected as President of Indian Institute of Architects, twice in his career.  In an age when there was no noticeable media attention to architecture and professionals were known only by their success, usually commercial, G.B. Mahtre’s contribution, although important went unrecognised. His reticent nature and the prevailing ethics of the profession, which did not look kindly at publicity, did not help bring him the fame he deserved. However, those who came across him professionally acknowledge him as a gifted architect.

He was a steadfast modernist who grew from traditional beginnings through an individualised version of Art Deco to Modernism. His worked evolved, rather than imitated trends that were prevailing in the west and which were classified under different heads like Art Deco, Modern, etc. “Tagging him as an Art Deco architect or labelling him as a remnant of the colonial era is incorrect” clarifies Kamu Iyer in his  book “Buildings that shaped Bombay- Works of G.B. Mhatre”.

Born in 1902 in a family of modest means, G.B. spent his formative years in Sir JJ College of Architecture. He was inspired by his teacher Claude Batley, who was sensitive to Indian architecture and uniquely introduced an approach to modernism through an understanding of traditional architecture. G.B. introspected on the past and absorbed from his deep study of Indian architecture, particularly the Muslim architecture of Gujarat. He left for England to qualify for the associateship of RIBA (Royal Institute of British Architects) and economic privations forced him to support his education with part time work. He came back in 1931 and joined the firm “Billimoria and Poonegar”. Some projects in the later stage were signed as ‘Poonegar and Mhatre’. Due to the sheer volume of his work, a lack of recognition in the field and no signature on his sheets, prompted Claude Batley to call him the ‘shadow architect’.

His practise is closely linked with the emergence of architecture which in the decade of 1930’s and 1950’s was significantly different from what preceded it.  This was caused by the sudden need of housing in a growing city. The demand was met by the City Improvement trust, which was formed after the congested area of ‘Native town’ was affected by an epidemic of plague. It undertook massive public work in newly reclaimed areas of the city and suburbs and in order to decongest the city. New areas were opened up for development. Among these were Marine Drive, Oval reclamations and Dadar-Matunga. The newer development showcased the concern for urban design issues and specific bylaws were evolved in each residential district. These related to setbacks, heights, and elevation controls.

Due to the strict bye laws by City improvement trust, variation in plan arrangement became limited and the architects concern shifted to the treatment of the external façade, design of the stairs, lift enclosures, entrance hall, and lettering on the exterior. In these, the influence of Art Deco exuberance was seen. But on the exterior, traditional weather protection elements like chajjas and verandas dominated the façade and the Deco became more local. The style could be called as “Bombay Deco”.

G.B. however, developed a personal and particular language. He designed buildings different from those prevailing at the time. He had no ideology, which allowed him to borrow techniques, material, forms and ideas and use them in his individual way. Hence an element of elitism is found in most of his work.  Initially Deco was seen only in symbolised structures of Theatres such as Regal, Eros, Metro, Liberty, etc. He made Art Deco a part of residences. 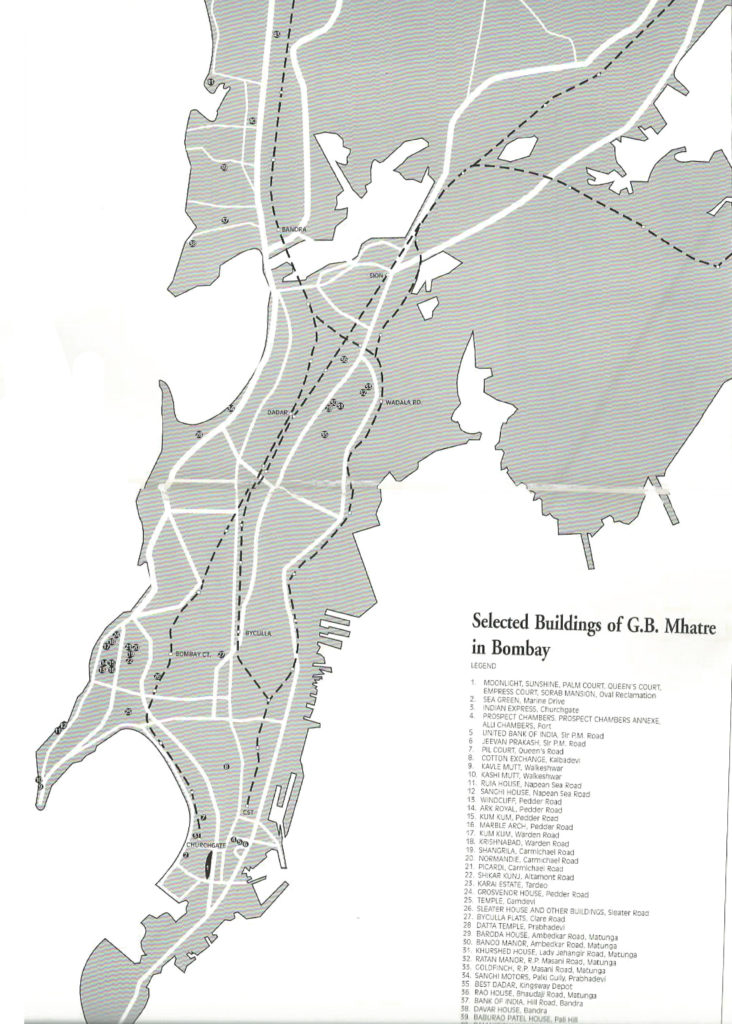 The design rides the divide between classicism and Deco and adopted the latter that indigenised the style to the region and context.

G.B.’s deco building was more three dimensional, emerging from the building line and providing a more comprehensive protection to the building appropriate for the hot-humid tropical climate of Mumbai.

Crown with the observatory, Soona Mahal has become the symbolic image of Art deco Architecture in Bombay. Structure manifests the various elements of Art deco in Mumbai. 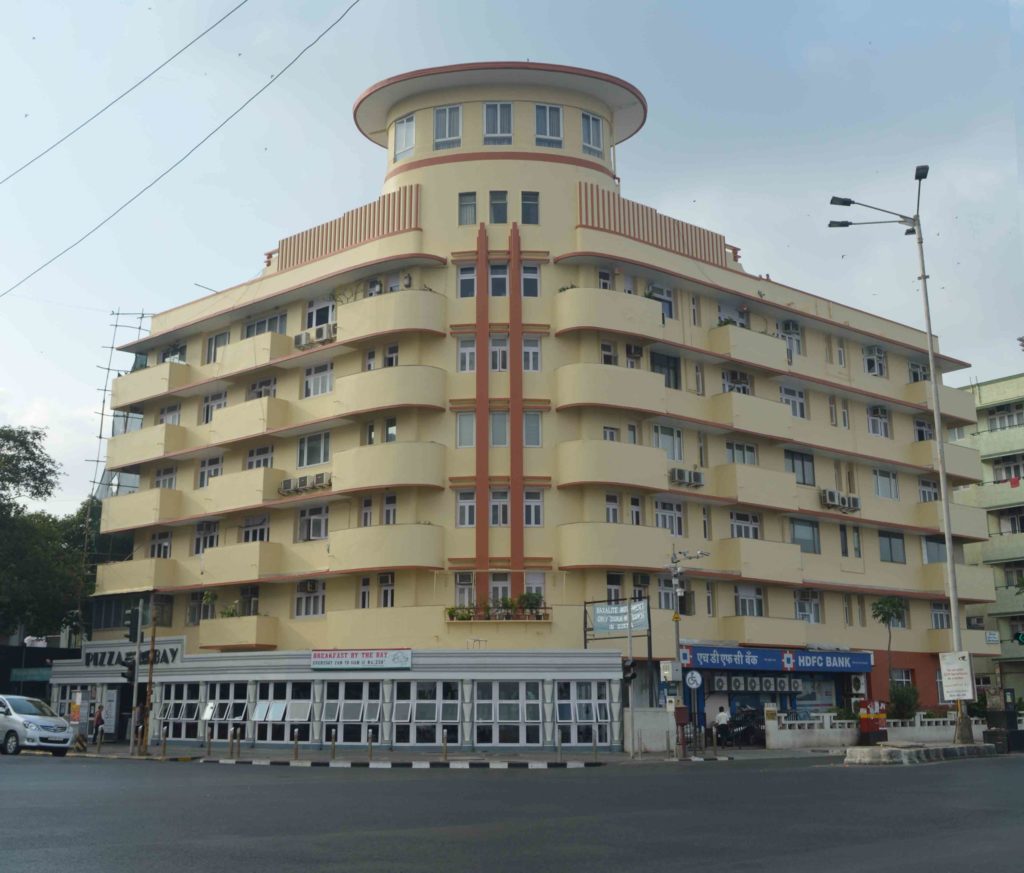 The design output was a manifestation of Modern Art Deco era and its system of proportioning, use of material and scale which was influenced by architecture of Gujarat.

With the guidelines and setbacks laid by Government, Moonlight flexibly adjusted to the new rules and stands out in a corner building plot. Art deco font of its name is hard not to miss. 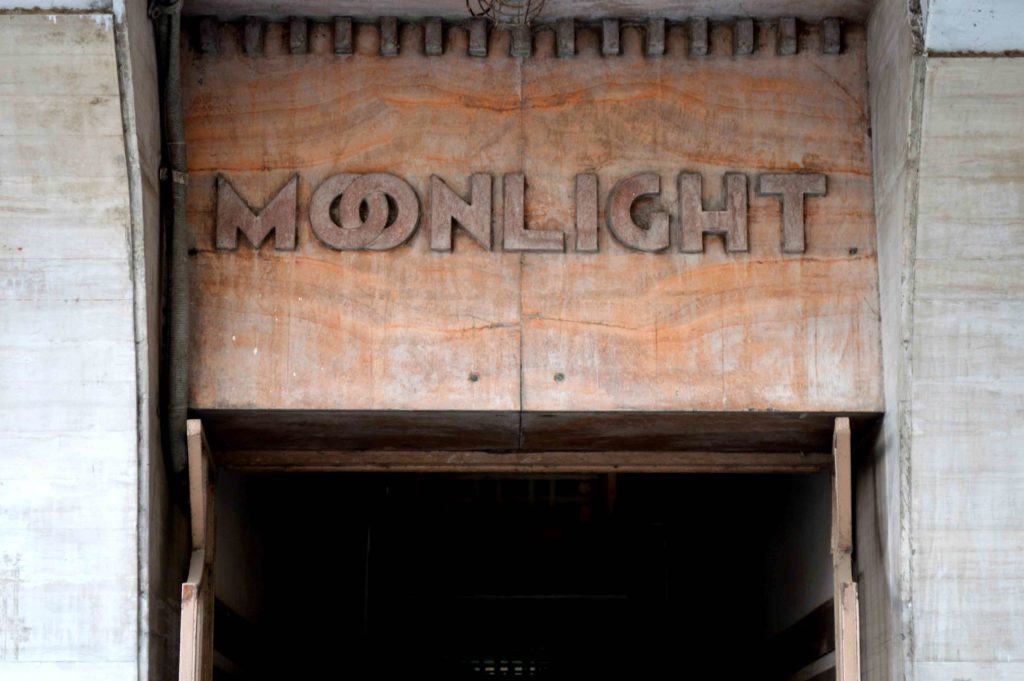 The chamfered corner building which faces the road on two sides, is balanced out in perfect harmony. Elements such as stream lining and massing is designed to make the building more modern and proportionate. 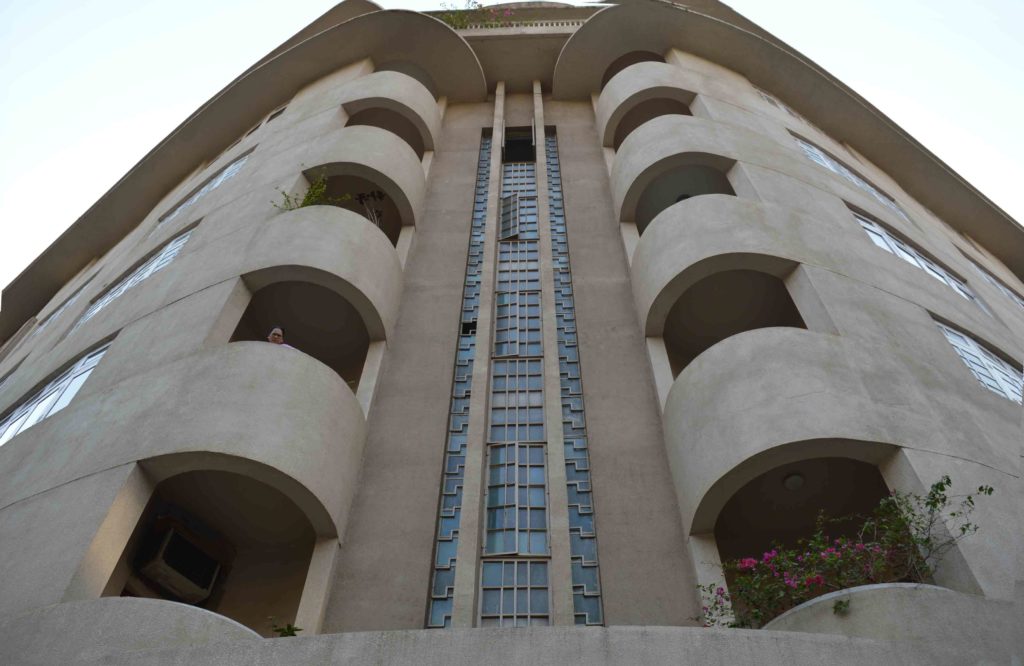 This article is a compilation from the book “Buildings that shaped Bombay- Works of G. B. Mhatre”, a monograph compiled by KRVIA and edited by Kamu Iyer in 2000, published by  Kamla Raheja Institute of Architecture and Environmental studies, JVPD, Mumbai.

It traces the development of his architecture from traditional beginnings through the Art Deco period to the modern. Some of the important buildings designed by him in Bombay are illustrated with drawings and photos, as also some of his unrealized projects.