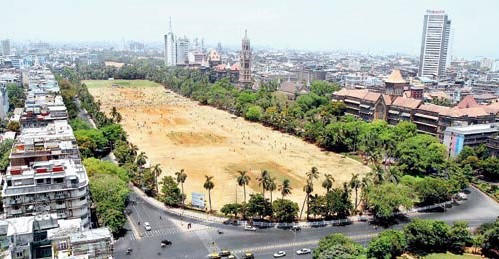 Submitted by:
Permanent Delegation of India to UNESCO

At the heart of the historic centre of Mumbai (formerly Bombay), lies the Fort Heritage Precinct. This marks the footprint of the 19th century fortified city of Bombay and though the fort walls were mostly torn down in the 1860s under the Governorship of Sir Bartle Frere, the name persists in public memory and is a protected heritage precinct under the Heritage Regulations for Greater Bombay 1995.

West of the fort walls, the expanse of land that was once called the Esplanade, is today the historic cricketing ground of Oval Maidan. This vast open space lies at the heart of the proposed Property. To the East of the Oval lies the historic Fort area with its monumental 19th century Victorian Neo Gothic public buildings and to its West, stand the 20th century Art Deco buildings of Back-bay Reclamation and Marine Drive. Together, these two architectural ensembles constitute the most remarkable collection of Victorian and Art Deco buildings, the largest such conglomeration of these two genres of architecture in the world.

The legendary cricketing ground, the Oval Maidan separates two radically different genres of Mumbai’s architectural evolution. It forms a spectacular and unique urban scenario, with an expanse of open space between the 19th century Victorian Gothic buildings of the Bombay High Court, University and Old Secretariat to its east and the 20th century development of the Art Deco of the Backbay Reclamation Scheme and Marine Drive to the west.

This conglomeration of Gothic Revival stone structures are among the finest group of Victorian Gothic buildings in the world. It perhaps is one of the most spectacular compositions of 19th century architecture, undoubtedly the finest Victorian ensemble In Asia. Designed by the likes of Sir Gilbert Scott, James Trubshaw and Lt. Col James Fuller, the Victorian structures were built in the period of 1871-1878 after the demolitions of the old walls of Bombay fort. The later Art Deco development was built to the plans of WR Davidge in the 1930s and represent among the largest collection of Art Deco buildings in the world. No other city in the world however, has both these large ensembles of emblematic 19th and 20th century styles facing each other in one grand gesture of urban design.

(ii) “Urbs Prima in Indis” as it was known in the 19th century, Bombay (renamed Mumbai), justifiably earned the status of the foremost city of India for reasons of its financial vitality as a bustling port, trading town and a metropolitan melting pot. The foundations of the cosmopolitan character of the city was laid as early as the 1670s, by Governor Gerald Aungier who encouraged mercantile communities to settle in the city with the assurance of religious freedom, liberty to trade and build homes. By 1850’s Bombay became a fusion of varied cultures and opened her lands to truly develop as the “Gateway of India” bringing together industrial growth, international architectural styles and nurturing different ideologies to develop in an analogous fashion. The Gothic Revival buildings of the 19th century were a conscious political statement by the British rulers of Bombay. Art Deco arrived in India, literally, on the shores of Bombay spurred by the great reclamations and frantic building activity that were taking place in the city in the 1930s. Art Deco percolated through to India from Europe and chiefly from Britain and manifested itself in Bombay, especially through its iconic cinema halls which signalled its place as the film capital of India. A unique combination of factors led to the popular adaptation of the style In Bombay. Tourism and travel had made rapid strides in the period between the two World Wars, resulting in a continuing stream of visitors to Bombay. The city has thus been the ‘Gateway of India’ for architectural ideas for over two centuries, exemplified by the import of the Victorian Gothic of the 19th century and the Art Deco of the 20th century, which then was indigenized to become its own.

(iv) The eastern flank of the Oval consists of an ensemble of monumental public buildings, representing the height of 19th Century Victorian architecture. Just across this open space, is the 20th century development of the Art Deco Marine Drive and Backbay Reclamation, that is among the largest collection of Art Deco buildings in the world, at the cutting edge of this global development and especially iconic for a country like India. The expanse of open space of the historic Oval Maidan (the site of the esplanade facing the 18th century Fort) bridges the yawning gap between the two centuries with the 19th century Victorian Neo Gothic buildings to its west and the 20th century Art Deco precinct to its east with the Arabian Sea surrounding this promontory. It defines the western edge of the old British Fort, and was for the early part of its existence, a portion of the sea facing green called the Esplanade. Constructed along the footprint of the medieval British fort, this development is representative of the greatest monumental colonial urban developments In British India.

Statements of authenticity and/or integrity

The authenticity of the property, especially the core area of the buildings fronting the Oval Maidan has been remarkably well preserved, with the buildings having been preserved without any external transformations or major alterations to the historic fabric. The maintenance regime and its intervention have been largely minimal, thus allowing the buildings to retain their authenticity, both in terms of scale and material. The bulk of the Victorian buildings facing the eastern edge of Oval are owned and maintained by the Government. The Art Deco buildings too, maintain the authentic Art Deco features to a large extent.

The overall layout of the entire ensemble of the Victorian and Art Deco precincts retain a high degree of integrity. Apart from a single modern infill in the Victorian precinct, this precinct is largely intact, with its structures intact and maintained. The Backbay reclamation area has had perhaps greater changes because of the fact that these structures are privately owned, but most of the original features remain. Since this area comprises mainly of residential buildings, changes are largely of the kind of enclosing open balconies with glazing, change of window designs and such minor additions that are now being strictly monitored by the Heritage Committee. Some cases of infills have been seen, but largely retain the same scale and texture.

Comparison with other similar properties

World Heritage List Comparisons: The growth of Mumbai started as a port. Many internal factors and also global phenomena such as American Civil War, opening of Suez Canal spurred economic growth in the city. The prosperity due to increase in trade and commerce resulted in the large construction activity in post 1860s. The city adapted to the changing global phenomena and thus continued to be the harbinger in country’s economic progress, the role which it continues to play even today. The city of Mumbai became a melting pot of cultures, influences from the West and this synthesis was well evident in its architecture. The Victorian Neo-Gothic style became popular and Mumbai today preserves the most magnificent neo-Gothic buildings in India and also in Asia. Globalization in the early 20th century brought another style of architecture, Art Deco, which was well adapted in the city and today, the Art Deco ensemble In Mumbai is one of the largest collections in the world. Together, they represent the greatest monumental colonial urban developments in British India.