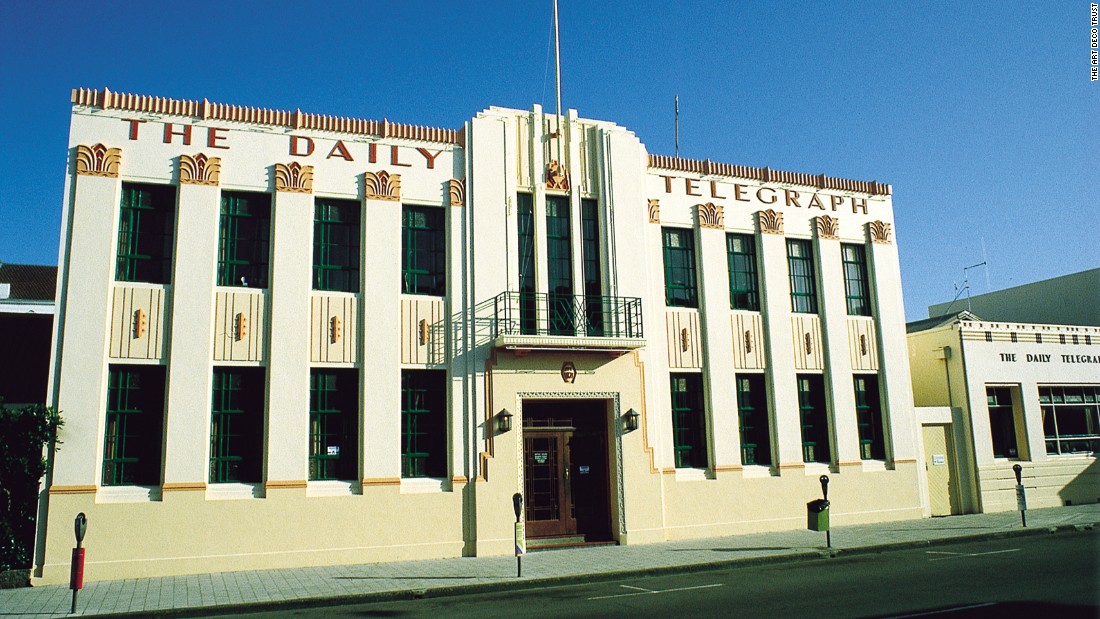 Once promoted as the Nice of the Pacific because of its Mediterranean climate and tree-lined promenade, the seaside town of Napier in Hawke’s Bay, New Zealand was transformed in February 1931.

Hit by an unprecedented magnitude 7.8 earthquake, buildings and roads were destroyed, fires roared, and 161 people were killed. The town faced near total destruction.

As the veils of choking dust settled, survivors were met with complete devastation, but the city stood strong in the face of one of New Zealand’s worst natural disasters, and Napier is now home to one of the largest — and most beautiful — collections of Art Deco buildings in the world.

“What is unique about Napier is a uniform collection of styles of buildings completed within a short time frame,” local historian Michael Fowler says.

Needing to house and reassure the local residents, New Zealand’s government set about rebuilding the town.

It put two commissioners — John Barton and Lachlan Campbell — in charge of the Reconstruction Committee, and the pair’s quick, clever decisions and unified plan allowed rebuilding to start almost immediately, according to general manager of the Napier Art Deco Trust, Sally Jackson.

Napier’s four architectural practices — E. A. Williams, Finch & Westerholm, Natusch & Sons and J. A. Louis Hay — also banded together to share facilities and bring a unity of purpose to the task of rebuilding the town.

Most of the architects chose to adopt the Art Deco style, not only because it was highly fashionable at the time, but because its simplicity and clean lines suited the holistic, safety-focused approach required for the rebuild.

“Art Deco buildings were also incredibly simple and cost effective to build as they are basic square reinforced concrete buildings — albeit with beautiful decoration on the interiors and exteriors,” Jackson says.

In less than two years one hundred and sixty buildings were completed in the city center, and the new Napier was born.

The inner city of Napier is now recognized as having one of the largest and most beautiful concentrations of Art Deco buildings in the world.

The style favours geometric patterns such as angular zigzags and ziggurats, and symbols of power, speed and freedom. New Zealand architects also incorporated complimentary design motifs from the local indigenous Maori tribes, adding a unique flair to the architecture.

The National Tobacco Building in the seaside suburb of Ahuriri is one of the most photographed buildings in Art Deco Napier, according to local historian Michael Fowler.

“Amongst the building’s ornamentations are Art Deco sunburst symbols, which while not unique to Napier, reflect its characteristics of sea and sunshine.”

But Napier’s tour de force in combining Maori design with Art Deco aesthetic is the old BNZ Building, which was restored and refurbished after being taken over by ASB Bank in 1993.

Ornate carving patterns in cement plaster feature prominently, incorporating the zigzags frequently seen both in Maori and Art Deco motifs, and the designs in the entrance opening are said to represent “the wealth of the tribe.”

In the mid-1980s Napier’s buildings were at serious risk from developers and the Art Deco Trust was established to protect and preserve the city’s heritage.

Jackson says Napier City Council now uses the Trust as a key stakeholder and consultant on all development that could impact the heritage buildings in Napier.

“The Trust has a large archive with many drawings and images of almost all buildings in Napier. We use it to advise owners on how to go about ensuring that refurbishments and repairs are done according to the Art Deco style,” says Ann Galloway, a local Napier architect and contractor for the Trust.

The town’s careful preservation has helped transform this sleepy seaside resort into one of New Zealand’s top tourist attractions and visitors now flock to the city to admire it unique architecture.

The earthquake is not forgotten though, and every February, the city celebrates the town’s courageous resilience and rebirth with the Napier Art Deco Festival, a colourful celebration of the food, music and beauty of the Art Deco era.

“The magnificent setting of the town, especially on the Marine Parade with the Pacific Ocean so close is really special,” says Fowler. “Add in a few vintage cars and “jolly good show old boy” and you’d think you were back in the late 1920s or ’30s!”

By Sandra Smedhall, for CNN